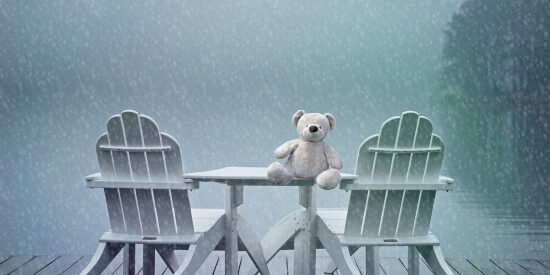 September 6, 2022 – This article is one in a series of articles about ACJI’s 10 Essential Principles of Implementation Leadership. If you’re new here, take a look at principle 1 and principle 2 first.

Principle 3: Be Comfortable Being Uncomfortable

Many organizational change theorists nod to this notion yet they leave us with linear change models that simply do not meet the needs of today’s complex, people-serving systems.

Let’s look at some of the original thinking in the study of change management.

The Kübler-Ross change curve developed in the 1960s was intended to illustrate what a single person goes through when adapting to a major life change. The model was later applied to organizational change management in the 1980s.1 The model proposed a stages-of-grief approach where individuals, and also organizations, go through sequential steps of gradual improvement over time until the change is finished.

The same was found to be true by other organizational change theorists such as John Kotter, who in the 1990s postulated an award-winning 8-step approach to successful change.

Many believe that the original change curves still offer potent models for change. The problem with these models is that they unintentionally convey an illusion that change is predictable, comes in stages, has a discernible stop and start, and that things get better over time.

If change really was a linear process, the modern community reentry and justice sectors would have far better implementation outcomes. In general terms, the research says that there’s a 70% global failure rate in implementation efforts.2 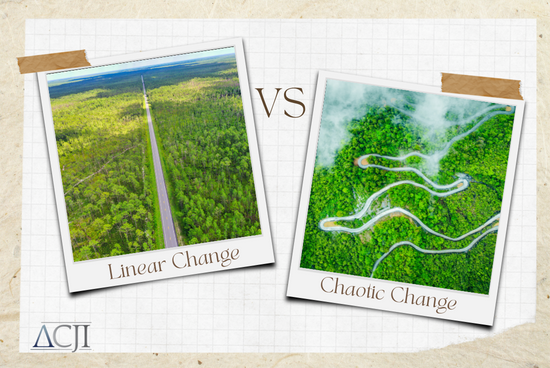 So. Much. Change. In The Legal Criminal System

In the last decade, many agencies have embarked on implementation efforts such as

Many of the agencies ACJI works with report being in different stages of 10 or more major implementation efforts, some inspired and many imposed, at one given time. (ACJI estimates most states pass an average of 40 pieces of criminal legal legislation annually. Read more about that here.)

Question: How does any agency change leader know when any one innovation is done?

Answer: They don’t. True, sustainable change requires infinite thinking and a long-game approach. This work is never done, even long after we have moved on from our roles.

There isn’t a sequential evidence-based checklist for how community reentry and justice agency change leaders go about effecting change in their organization. Rather, leading change can feel like chaos. Real-world community and justice leaders must find comfort in that chaos. More importantly, they should model that comfort to others.

The implementation science community has presented a more hospitable change model in the Productive Zone of Disequilibrium.3 Originating in adaptive leadership literature, the model states that change cannot happen in the same zone where we are comfortable. It compels leaders to establish a firm commitment to work outside their own personal and organizational bubble of comfort. The model establishes that change is not linear but is a dynamic and unpredictable phenomenon.

Where linear change models imply that resilient leaders stand and take the punches of change until it’s over, real change requires going beyond linearity and resilience into models that demand we move forward, sideways, and backward through always-changing levels of chaos.

Real-world implementation leadership is never-ending and requires a very specific set of skills. Of particular importance is for the organizationally-intelligent leader to be comfortable being uncomfortable and lead others to be the same.

If you are a criminal legal system leader, be sure to read our next article on Principle 4: Adapt or Die. You can also learn more about the 10 Essential Principles of Implementation Leadership in ACJI’s upcoming Academy where we talk about all 10 of the principles in much more depth.

The Alliance for Community & Justice Innovation is dedicated to the implementation of science based principles, practices and policies designed to innovate and bring about system change for better results. Our team brings over 90 collective years of experience, applying creativity and insight into the implementation of research-driven practices. ACJI staff are not just practitioners or academics, they are “Pracademics”—experts at the top of their fields with demonstrable track records creating, implementing and sustaining innovative evidence-based practices across criminal justice and people-serving systems.

Change Resistance In Your Agency
November 28, 2022